Find out Where to Legally Watch all Your Favorite Shows

Find out Where to Legally Watch all Your Favorite Shows

The Motion Picture Association of America (MPAA) is about to make your TV and Movie search methods ten times faster. The MPAA launched a website called “WhereToWatch” which tells you where you can watch all your favorite TV series and films (whether it’s on Netflix, Vudu, iTunes, etc.) and best of all, where to watch them legally. This site aims to help combat illegal downloads and streaming of creative content and support the film and television industry, which has seen a loss in profits with the rise of illegal content sharing online.

WhereToWatch is an ad-free website and a non-profit organization. On its FAQ page, the site claims to “give the audience the high-quality, easy user experience they deserve while supporting the hard work and creativity that go into making films and shows”. There is no app available for the site. The layout is designed to be compatible with any device’s web platform, and offers a prompt to bookmark the page when using a mobile device. WhereToWatch also offers a notification system, where users would receive an alert as soon as their favorite movies and shows become available on their streaming sites of choice.

WhereToWatch is a fantastic site for those that want to support the TV and Film industries by watching movies and shows legally. We don’t see this site ending online piracy, but it is definitely a step in the right direction.

Don’t forget about MoreFlicks – free on-line tool (by Unblock-Us Smart VPN) to quickly find a Movie or TV Show across popular Streaming Services in different regions: Netflix, Vudu, Hulu. ITunes, BBC iPlayer, Fox, and Crackle. WhereToWatch does not have this option available and is currently tailored towards a United States audience.

What do you think? Is WhereToWatch a site you would use? 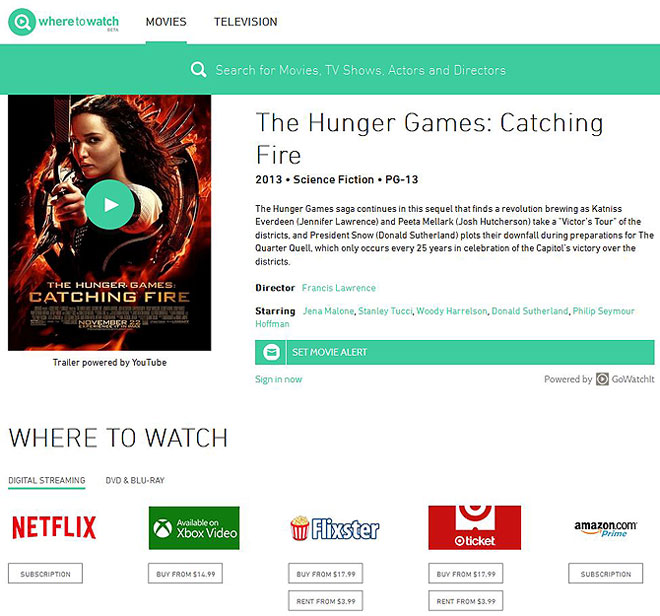